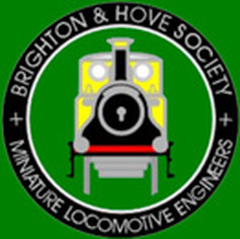 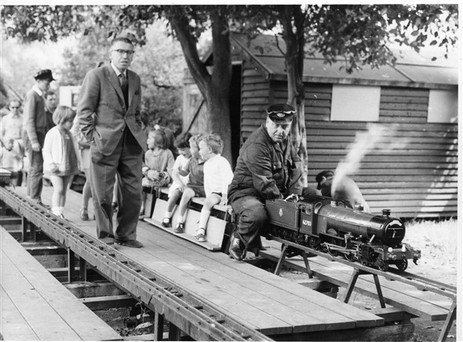 History of Our Track

Hove Park Railway is run by a band of enthusiastic volunteers who enjoy socialising, building, maintaining and running steam, electric and all sorts of other model engineering items. All are members of the Brighton & Hove Society of Miniature Locomotive Engineers.

The Society was formed from the old Brighton & Hove Model Engineering Society back in 1962. Its aims are to promote the practice of steam engineering in all its branches, but other forms of motive power are not excluded! In fact, many of our members have a much wider interest in model engineering generally.

Apart from operating the railway, the society holds regular meetings of interest to the members at West Blatchington Mill, Holmes Avenue in Hove. These meetings are held fortnightly during the autumn and winter months, and include talks, film shows etc.

There has been a miniature railway in Hove Park for more that 65 years. The very first line was short, less than 90 yards in length, and started from roughly where the present station area is and ran towards Woodland Drive. The railway has been extended on a number of occasions, but it was in the early 1970s that a longer continuous raised track was constructed, of mixed 3.5-inch and 5-inch gauge, some 2000 feet, (610m), long.

Unfortunately, the now infamous hurricane of October 1987 destroyed over quarter of this track and we had to set about re-building the whole structure, which took 5 years. During all of this time, we managed to use short sections and we are proud to say that we never missed a scheduled public open day.

The track in its present form was finally re-opened in 1992.

Become a member of the society